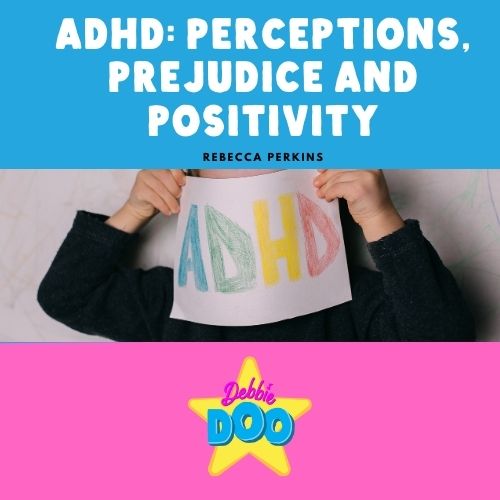 Hi everyone, thanks so much for visiting today and to our regular readers, welcome back. ❤ I met Rebecca Perkins at a seminar she was running for children with diverse needs and we had a heart connection almost immediately. We talked much about ADHD and the evidence that it was once an evolutionary advantage. This is a subject I could write much about after two members of my immediate family were diagnosed with ADHD, but I will leave it to the expert! So without any further ado, I introduce to you Rebecca Perkins and hope you gain comfort, hope and inspiration from her words. Take it away Rebecca!

In my family ADHD is not a disorder, it’s a way of life. I have ADHD and both my children have ADHD. In our household, having ADHD is not bad, it’s just different. It’s a different operating system which makes some things more challenging and some things easier. Much like the difference between MAC and PC.

Unfortunately, one of the hardest things about having ADHD is not an ADHD symptom at all, but the stigma that spreads through our modern day society.

The harmful misinformation that is created in part by a lack of awareness and understanding and partly by the sheer fact that the modern world is built in such a way that hinders not only individuals with ADHD but all disabilities.

This lack of awareness and understanding was one of the main reasons I originally founded My Special Child. I was so frustrated with the absence of support and accurate information available to people that I decided I would create it myself, by creating a company that offers information, support and resources to help neuro-divergent children and adults.

Unfortunately in modern day society ADHD is viewed through such a negative and deficit based lens. Many people don’t see the many incredible benefits of having ADHD. Don’t get me wrong, ADHD has challenges, lots of them in fact and life can be very difficult for someone with ADHD.

If an individual with ADHD goes through life unsupported, things can get increasingly hard for them. However, with support and assistance in the right way, a person with ADHD can be really highly successful.

There are many entrepreneurs and stars who have ADHD. Billionaire Richard Branson has ADHD, Singer and movie star Justin Timberlake has ADHD and olympic swimmer Micheal Phelps has ADHD. Nurture a child with ADHD and you really can see the magic of what they can become.

I have come to realise that many of the challenges associated with ADHD are not created by ADHD itself, but by the modern world that we live in.

Today, sadly the world is designed to be as difficult as possible for people with ADHD. Everything from the school system to work systems and structures. Even disability services themselves are deficit based, confusing and often don’t help people anywhere near as much as they should. Many support services and funding options don’t even include ADHD, leaving families and individuals lost and confused.

My dream was always to change that system and now, along with the incredible Christina Keeble, we have teamed up to create National PEKE Centre based in Cranbourne, the first centre of its kind. Where everything is strengths based, empowering and positive. Where everything from diagnosis to therapies are all under one roof, and all the practitioners work together as a team to help people.

Thanks for your wonderful and much needed insight Rebecca. Let’s unstigmatize ADHD and help children feel supported, accepted, celebrated and valued no matter what internal operating system they were born with. Thanks for tuning in everybody and I’ll see you all again soon. Bye for now. Debbie Doo ⭐